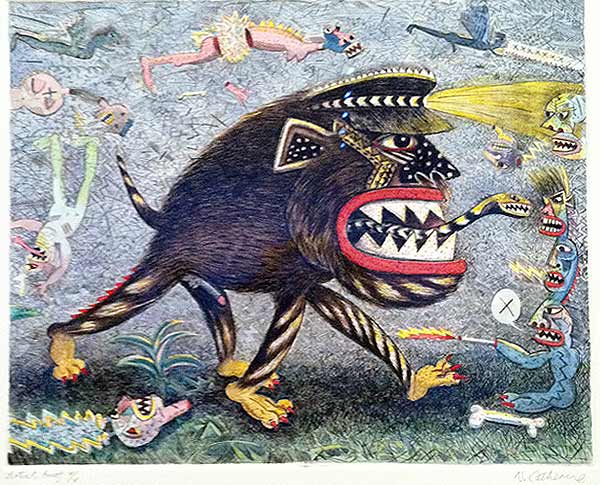 Witch Hunt, by Norman Catherine, 1988. One from a series of six drypoints with watercolor additions.

There’s always something new and exciting to discover at the Museum of Modern Art. And my recent visit was no exception. When viewing the exhibit Impressions from South Africa: 1965 to Now, I had to stop and spend some extra time with the amazing works of South African printmaker and artist, Norman Catherine. 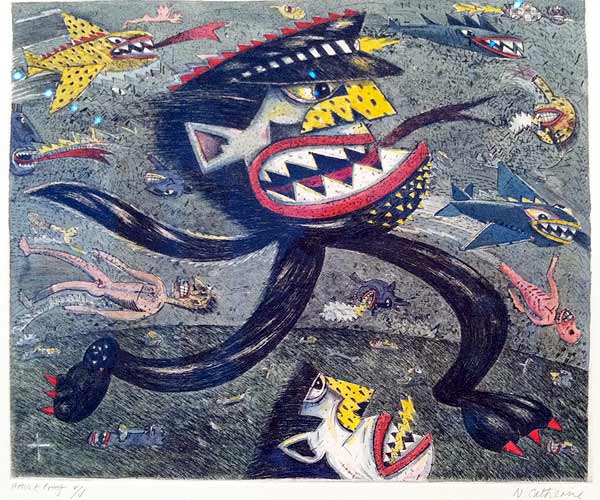 Prototype, by Norman Catherine, 1988. One from a series of six drypoints with watercolor additions.

Captivating, disturbing, playful, violent and beautiful…all at the same time. I wish I’d been aware of Mr. Catherine’s work when in the honors program at Hunter College studying South African history and politics. It was a tough couple of semesters that would have been greatly aided by interpretive visuals like these. And if a picture is worth a thousand words, well, then these six works are worth a million. 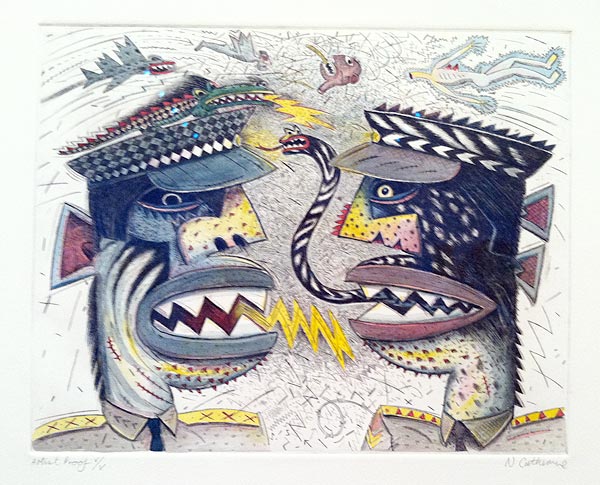 Warlords, by Norman Catherine, 1988. One from a series of six drypoints with watercolor additions.

The artist describes his inspiration for this series:

“The portfolio of six hand-colored drypoint etchings entitled States of Emergency…were done in 1988, two years after the State of Emergency was declared in South Africa. It was during this time of the final death throes of apartheid that the previous regime was at its most vicious and paranoid.” —Norman Catherine 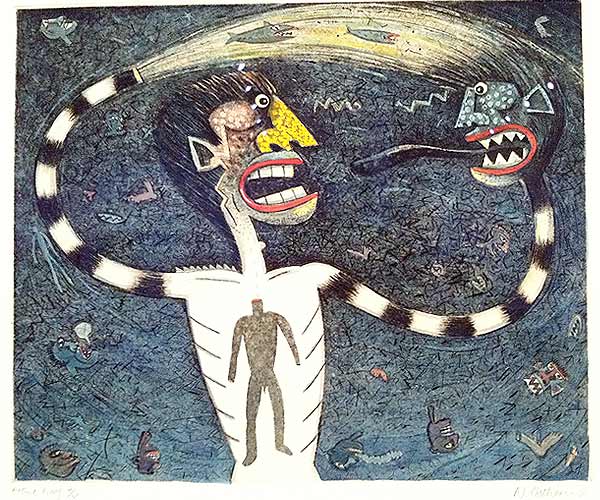 Psychoanalysed, by Norman Catherine, 1988. One from a series of six drypoints with watercolor additions.

“Psycho-analysed reflects a schizophrenic society as well as the personal turmoil and inner conflicts that many a South African felt at the time, the tearing apart of oneself and identity within the maelstrom of violence, upheaval, and uncertainty for the future.” —Norman Catherine 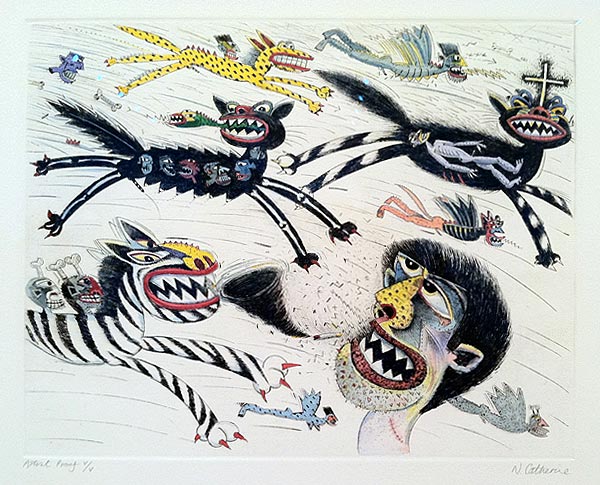 Low Flying, by Norman Catherine, 1988. One from a series of six drypoints with watercolor additions.

“Low-flying represents a visionary daydream/nightmare of carnivorous creatures, reminiscent of the Horsemen of the Apocalypse, sowing the seeds of destruction and devouring everything in their path, angels of Death accompanying them.” —Norman Catherine 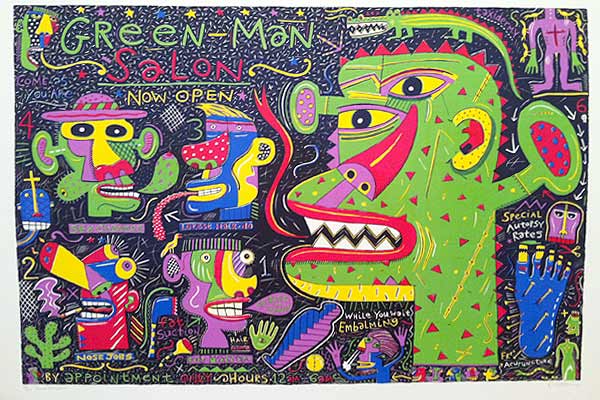 This last piece is not part of the series above. It definitely has a different look to it than the others. But there’s still that contradiction between playfulness and horror. I think Catherine is a genius to create such dichotomy with his work.

Norman Catherine is a self-taught artist having just a couple of years of training during high school. He was born in South Africa in 1949 and lived in the U.S. for a time during the 1980s—both in LA and NY. And now lives about an hour outside of Johannesburg. Catherine works in a variety of media including drypoint etching (intaglio), painting, sculpture, mixed media and bronze.

“Intalgio is a family of printmaking techniques (including etching, drypoint, and engraving) in which the image is incised into the surface of a metal plate. The process generally produces detailed linework, both scratchy and fluid, and it has been used by artists such as Francisco de Goya and Otto Dix over the centuries to depict the cruelty of war.

In South Africa, throughout the mid- and late 1980s, the apartheid government declared a continuous state of emergency, during which the police had sweeping authority to detain civilians, ban organizations, and impose strict curfews. During these violent years, some artists, such as William Kentridge and Norman Catherine, used intaglio to capture the brutality through metaphor and satire.” —from the placard at MoMA 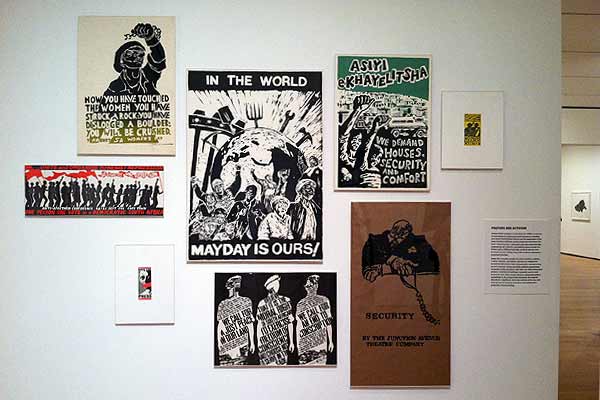 Entrance to the MoMA exhibit

You can visit the exhibit Impressions from South Africa: 1965 to Now at MoMA through August 29, 2011. Besides Catherine’s work there are also fantastic linoleum cuts and lithographs by a variety of artists.

PS: Source for quotes and most captions is the MoMA web site. Photos were taken by me using my fabulous not so new anymore iPhone.